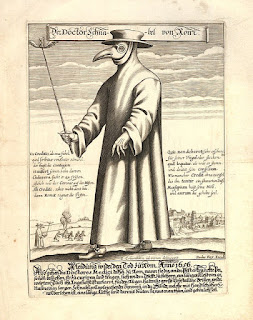 Ever want to spice things up, add a little tension and filth into your game? Consider a plague.

Not a soul would ever wish the Ashen Plague on another, for fear that such words have power. And for good reason; the plague mutates and changes rapidly, making it difficult to prevent and treat. Before we can begin to formulate a good, hearty plague, it's important to decide on the original cause; who benefits from the spread of death and disease. That, and the cure.

- Cause
1. A sect of devil-worshipers that have pledged their service to a vile, diseased fiend.
2. Doctors that were seeking to profit from an easily-treated, artificial epidemic.
3. A group of malcontent nobles who believe commoners are growing too swiftly to control.
4. A rival nation that seeks to weaken their neighbors for later invasion.
5. An ancient deity that has grown angry at the populace for their sins.
6. Mad wizards were creating artificial life - a living disease was the result.

- Final Cure
1. A strange vaccine that will take 6 months to complete.
2. Enough prayer to bring divine intervention.
3. A pact between the highest power in the land and a fiend.
4. The death of the plague's creator.
5. The waters from an ancient, holy wellspring in a forgotten corner of the realm.
6. True repentance of the nation for their communal sins. (Real or otherwise)

Once the cause and final cure has been established, create the plague. Roll once on every table - Duration, Delivery, Symptoms 1 and 2, Mortality Rate and Treatment. Whenever the duration of the plague has expired, repeat the plague creation process. The Cause and Final Cure do not change.

Temporary Treatment
1. Oils and perfumes made of common household herbs.
2. Clean water, must be blessed.
3. Bloodletting to remove impure blood.
4. Cauterization of infected tissue.
5. Strapping a live poultry to infected tissue (when poultry dies, it takes plague with it).
6. Salves made of strange herbs and raw egg whites.

Want some extra fun? Try a plague-time encounter on for size.

1. Angry peasants without enough food clashing with the city/royal guard.
2. Local militias are barring access to all uninfected towns, villages and city districts.
3. Looters breaking into quarantined houses to take the dead's unneeded goods.
4. Body collectors gathering the dead, with chained flesh-eating ghouls in tow.
5. Plague cultists spreading bile and foul liquids.
6. Priests marching through town burning incense and blessing the unworthy.
7. Genuine doctors working to cure the plague, beset by angry, desperate infected.
8. Fiends and devils temporarily curing the plague in exchange for individual's souls.
9. Plague doctors that don't know what they're doing at all.
10. Flesh-eating ghouls roaming the streets, devouring the dead and attacking the living.
11. A group of doctors and priests trying to flee the most heavily-infected areas.
12. Wizards performing hideous experiments on the infected.
13. A divine emissary, shielding a small group of faithful from the disease.
14. An angry mob burning houses and lynching people they suspect of bringing the plague.
15. Cultists sacrificing the healthy to their dark masters.
16. Raiders from a far-off land utilizing the chaos and weakness to loot and pillage.
17. Heavily armed mercenaries culling the infected population.
18. Vampires taking advantage of the chaos to prey on what few healthy humans remain.
19. Ghost towns - entire districts sealed off, full of nothing but death.
20. A mass grave, being filled with bodies and doused with fuel for a bonfire.
Labels: Design Disease Magic Table