Updates in the coming weeks are going to be slower than usual. Hah, didn’t think that was possible, did you? I’m working on two projects at the same time and my home campaign. One of those projects will ultimately end up on here as a larger dungeon. It will also receive more polish than anything else I’ve ever posted here. This is actually quite easy to do; I don’t really edit any of this trash.

Here’s something to chew on for the time being, though.

At one time, a city thrived here. Slowly but surely, the decadent spires rotted; stone crumbled to dust and melded with the rocky ground to create a fetid township of rubble and broken dreams. The rich merchants and priests departed in search of a new city to begin the cycle of financial bloodletting once more, and those blasted ruins were filled with nothing but the wails of lepers and widows. Still, the community held together for a while longer. Longer than it had any right to. The city was an affront to the gods, and they damned it by turning their backs on the hellscape.

The Cistern is the only reason that people ever come to the Black Moon Ruins. It’s the only reason that a small ramshackle inn named the Lantern-Post is able to stay in business, and why strange merchants tend to congregate here. They seek to buy the things that adventurers dredge up from the Cistern, and to sell them for a profit.

What is that place, though?

The Cistern
Life requires water. This is a law that is rarely broken. The Cistern of the Black Moon is plentiful, though tainted. The wells in the area draw water that is contaminated by bloody discharge and plague. Long ago they were filled and boarded up. Now, the only method of drawing clean water is to venture down into the labyrinthine passages of the cistern proper. There are pits full of clean water, if one delves far enough. 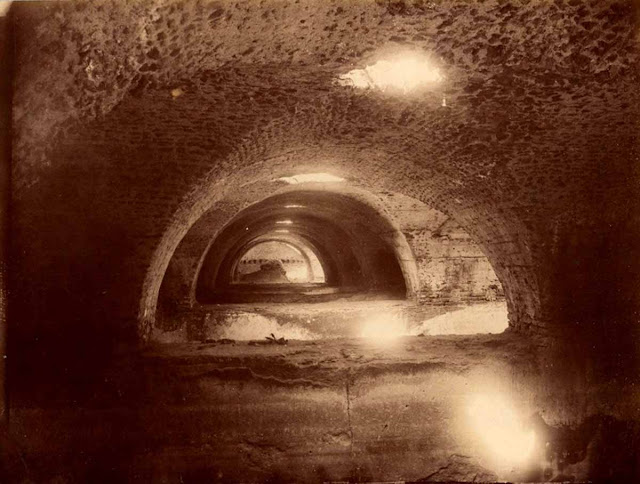 Where does the water come from? Where do the things in the cistern come from?

Why, it’s where everything Forgotten ends up. Keeping accurate track of one’s water is difficult. How easy it is to let a single drop stray from your mind. When this happens, that droplet evaporates and transmutes into clandestine vapors. They waft for days until they reach the Black Moon Cistern, where those vapors rejoin their waywards siblings in one of the many pools found in those dark depths. Water that is forgotten finds its way home, and so do many other things.

There are hundreds of thousands of pits. The cistern never really ends, it twists back on itself like a snake devouring its own tail. As soon as someone forgets that a certain pit or passage exists, it vanishes. When one tries to recall a specific pit, there is a chance that it might reappear, though this depends on the memory of the rememberer.

Generating the Cistern
There's a few problems, when it comes to the Cistern's layout. First and foremost is the fact that it's all but infinite; as soon as something is forgotten, it changes. Maps work to stave off the process, but looking at a map isn't the same as remembering the actual passageways.

Passages will change after 1d6 hours if no map (or a bad map) is drawn. Passages that have been accurately mapped will not change until 3d6 hours have passed since the cartographer has ceased work on the map.

DISCLAIMER:
The following table works in conjunction with two things. The AD&D1e DMG and Dwarf Fortress.

First:
Use the AD&D1e Dungeon Master’s Guide Appendix A, table V to map out a bunch of rooms and use the following table in place of V. F to stock those rooms. Use the rest of Appendix A if you feel like, because that’s always fun.

Second:
Boot up Dwarf Fortress, generate a world if you don’t already have one and then go into Legend Viewer and rip a few Forgotten Beast descriptions to use the things lurking in your dungeon.

Here’s a few examples, if you’re too lazy to do it yourself.

Alright, so you’ve got a few rooms and some strange monsters to roam them. What about the rest of the stuff on that table?

1-6: Empty
Not literally empty. Check out Courtney Campbell’s crazy good work titled Empty Rooms, & Basic Trap Design. These should be ‘encounter-free’ rooms. They might still have interesting things in them, but the point is that there’s no immediate monster, trap or treasure to worry about.

Also note that every single passage and room in the Cistern has at LEAST 1” of water in it. There are almost no dry floors to be found down here.

13-14: Forgotten beast only
A Forgotten Beast has made its lair here. Make it suitably strange.

15-17: Forgotten beast + Item pit
Same as above, but treasure that has been forgotten also resides here, waiting to be salvaged.

18: Special
From the AD&D DMG: “Determine by balance of level or put in what you desire; otherwise put in stairs.”

19: Trap
A trap that went so long without being triggered that it was entirely forgotten, and relocated to the Cistern so as to prey on adventurers. Make as suitably complex as you want.

20: Item pit
Things that have been forgotten. Should always be at least -somewhat- valuable objects. The utterly mundane objects in life are never worth remembering in the first place, so how could they ever be forgotten? Only things of value can be mis-remembered. You could totally still use the DMG's treasure generation rules, or just make up shit based on whatever system you're running.