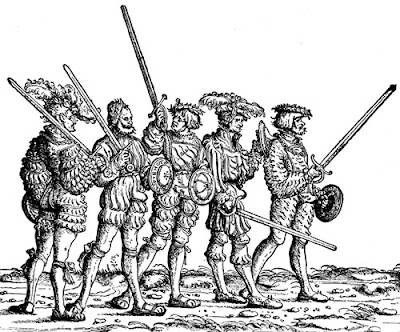 This is a sequel to the earlier entry of this series on keeping your shit together.

Let's start... At the beginning. How did the party get together? What keeps them together?


First and foremost, your players need to agree on this. In fact, I would assert that it is best if they are given a few choices to pick from or riff on, filling in the details to fit their individual characters.

I have seen more than a few campaigns lose steam at the outset just because the players have a hard time getting their characters to mesh. Let's assume that you had a 'session zero' of some sort before the first game to go over rules and roll up characters. Your players probably crystallized an idea of their character and now they're not willing to be flexible when it comes to slotting that character into a group. You have a few loners. You have a character who's mistrustful. You have a shifty-eyed thief or a warlock carrying a skull. An annoyingly plucky bard. A mercenary with one eye and a snarl.

Why should they stick together for an adventure if you don't give them a reason?

Players (almost) always know that they need to stick together for the game to function properly. Most players will opt to stick with the group even if it's an illogical or realism-breaking action so that the game flows smoothly.

Don't make them do that. Frankly, it's lazy and everyone at the table deserves better than that, including the DM. Instead, just give them a few choices when the session starts. Here's the general order of how the first 10 minutes of my ideal Session One would go.

Give the players a brief intro to the adventure. Give them the details that they need to know WITHOUT introducing their characters. To illustrate, I'm going to describe a sample adventure intro.

"You are all in the small coastal city of Thornham. Two hundred souls dwell here, and most of them make their living off the sea. The docks are on the southern end of town. A great marsh stretches to the east while an immense pine forest dominates the north. Night has already fallen and clouds are beginning to obscure the moon overhead when the church bell begins to ring; shouting can be heard from the city marketplace.

A brief cry rings out, only one word distinguishable: Snakemen. Before we continue, who are all of you?"

After providing a brief description of

1. The locale (Thornham, city, coast)
2. The immediate problem (Snakemen, the dark)
3. Something to respond to (Shouts, action, possible danger)

you can move the onus of the adventure to the players. But you have helpfully neglected to tell them where they are in relation to the action, or why they are at the location you have provided. This gives them a chance to consider the situation, and to talk things over.


Step 2: Give them options.

"As long as your group comes up with something reasonable, I'll allow it. Here are a few suggestions I have, to get you started. If anyone has an idea, now's a good time to pitch it. The only requirement is that you need a reason why the three/four/eighteen of you are all together.

Suggestion A: You're all mercenaries in the same company.
Suggestion B: You are members of the same trade caravan.

Suggestion C: You are a group of adventurers, out seeking riches."

Communal backgrounds that aren't in-depth personal backgrounds are nice. For example, in A, just because all of the characters are currently mercenaries doesn't mean they've always been mercenaries. It gives them an instant identity while leaving them room for an extended background if they want to write one up.

It even provides follow-up questions: Why did your character become a mercenary? What were they before? Do they like it, or hate it? What's their end-goal?

Group backgrounds like this tie everyone together neatly, give the players something to bond over, and hopefully don't suppress the character idea they've already come up with. By giving them options you're leaving it open to discussion and letting them object if something doesn't mesh with their ideas. For the players who don't really enjoy writing backstories, it gives them something easy to work with.

"The group has decided that because it is composed of 18 level 1 wizards, they are a group of amateur scholars on a research expedition. You have all stopped in Thornham to resupply and wait for your research equipment to arrive by caravan.

Your group decides that, seeing as how you can all cast at least one spell each, you are probably suited to helping out in a crisis situation. Also, if something happens to your research supplies, you're going to owe a lot of money to the school that funded this expedition. As such, you all depart from the inn where you are staying and make your way towards the heart of the city to investigate."

Stringing multiple adventures together can be tough. Give yourself some narrative room with the players, and try to work your adventure in somehow. If your players decide they just want to be a group of adventurers (which is admirable and easy!) then your workload isn't going to be that hard. But if they have an off-the-wall sort of idea? It's probably going to be fun, but you will have to make it work. If the idea strikes you as ill-fitting for theme or purpose, it's your job to strike it down.

"The adventurers kill the invading snakemen, chase them back to their forest ziggurat and kill the egg of their newborn god. Congratulations. Now, they can return to their research expedition that will take them into the heart of the snakemen's lands."

After the adventure is complete, the players are still tied together by their group obligations. This can be a very good thing indeed, as it gives them something to continue to work towards after the initial adventure. Use it as the framework for further adventures.

Alternatively, give them an adventure hook that's so tempting it causes them to abandon their group obligations in favor of adventuring. It happens, and it's fun. In the end, what the group decides to do is up to them, but as long as the referee provides plenty of hooks to chase after, the adventures should string together naturally enough. 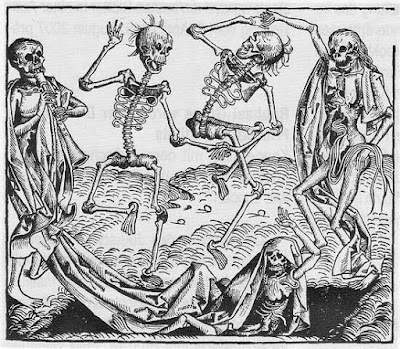 This isn't a foolproof method. It requires a little work from the referee to get things in working order, and it might require the players to put in a smidgen of effort with worldbuilding. That's a tall order. There's nothing wrong with just coming up with a group background and giving it to the players without any options.

There's also nothing wrong with having each player come up with a background and then tying it together so that they're meeting for the first time in your session: The important thing here is that you don't just drop the players into the game without ANY sort of explanation. That should be avoided, because it causes problems. Namely, why are a group of strangers sticking together without any external pressure on them?

Hopefully this is a useful followup to the Adventure Hooks article. And of course, I've composed a list of helpful 'group themes' that might come in handy.